RAPE:THE RAPIST OR THE VICTIM; I STAND WITH NO ONE (THE CONCLUSION) 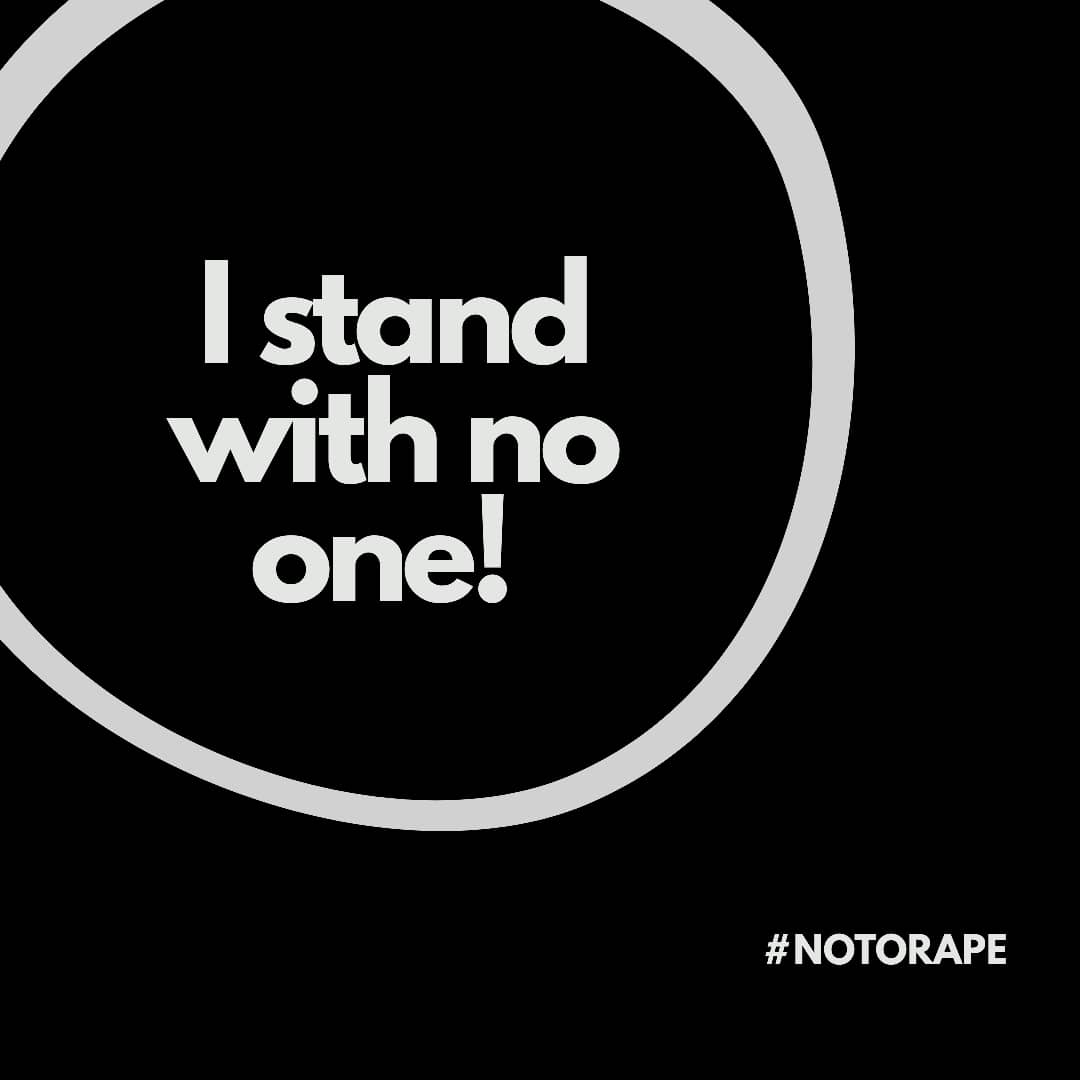 WHAT DO I STAND FOR?

Yes, still on this matter!

If you still can not process, let me say it this way… the chain is the abuser who has most likely experienced abuse at some point in their lives; either has been abused or watched people get quietly abused.

I heard some time that silence is consent. No, no double stand on this one, no!

We will never achieve our goal if we keep centering our campaigns on hate speeches and cry for justice, which in your understanding might be the offender facing a jail term or whatever grievous bodily harm can be inflicted on him/her.

The fact is that for every 100 rapists we get to face ‘justice’, a 100 or more are being harbored in our homes, neighborhoods, and society at large. Yes, I said ‘our’ homes, yours, and mine!

With this stated, I ask, what is our vision? What are the goals of our “SAY NO TO RAPE” campaigns that only call out the rapists, and those that only speak to them getting the ‘pain’ they deserve?

Have we considered the fact that most people who abuse others, have experienced abuse and those who have been abused are likely to become abusers?

That is the cycle we must break!

Let us expand our scope. Being myopic will not help us achieve a long-lasting goal. We will not forever be here, and strong to play bodyguard over our vulnerable “children”. Vulnerable because we have made them so, we have refused to equip them with what can protect them, reduce their risk.

Hey! Again, you are being narrow in your thinking?!

By children, I mean boys and girls… KNOWLEDGE IS POWER!

Why is a jail term not the solution?

Again, let’s be factual; the prison is not a miracle performing place.

It’s not a place that automatically changes demons to awesome human beings just by spending 20years in there.

In Nigeria,  you have someone who has stolen a goat being put in the same cell, under the same “correctional process” with armed robbers. What about that?

Or you are still not catching the Rhema?

I mean, leave politicians out of this for now (LOL); is your campaign not about Justice?

Except in very rare cases where death penalties are served; these monsters serve their jail terms, return to our societies, I would say just the same or even worse than when they got in, perpetuating more crime. I can imagine how they will rationalize their actions, “what else is there for an ex-convict?”. Of a truth, we all know it would just be back to the battles and struggles they left behind; drugs, homelessness, loneliness, endless chases.

Uhm uhm, what about our victims? The ones that have suffered the abuse, with all the effects, some temporary and more than all, permanent? The physical and mental scars they have to live with for the rest of their lives?

Do we hope a 20years jail term or even death takes all that away? I think we can provide the same answer to this question. This one time I am sure we are on the same page; we are making progress!

At this point, I employ you to be more logical than emotional. I chose the definition in the Merriam-Webster that communicates the point I will be trying to pass across here which explained Justice as “conformity to truth, fact, or reason”.

Professor Annalise Keating has made me understand that the fact that a person committed a crime does not mean he/she will be served karma equivalent to the gravity of what he/she has done in a court of law. She has taught me better to know that a judge will never rule based on emotions, sentiments, assumptions, or bias.

I know better now that a guilty person can go on roaming the streets of our society, with the innocent incarcerated within the four walls of a prison cell. Such claims might be based on something you might consider lame, mental instability. Excuse me, will you lock up an insane person? Worst-case scenario, he/she will be taken to a mental health hospital. If you did not know all these, now you do. This would mean that rulings are done based on facts, truths, evidence, whatever that could look like a motive, etc.

Do you also know how ‘truth’ is defined in a law court? (It is my pleasure to educate you…)  Truth is the ability of a lawyer to swing the argument in his/her favor. Truth is the ability of an attorney to convince the jury that his/her client, the accused, or simply put the rapist, in this case, is innocent. I mean a judge will not rule in the favor of the plaintiff he/she is in pain or tears. You think, no? Okay, ask Professor Annalise Keating how many abusers, murderers she has proven innocent in the court of law who roam freely… I mean a court in developed worlds. And this would be recorded as A FAIR TRIAL. Disappointing I know but it is what it is. Then if we must fight for justice, what I say is we fight with a right standing and this I will further explore in the preceding lines.

I STAND WITH THE FACT THAT WOMEN ARE STRONG, EVEN STRONGER THAN WE KNOW

Let us express our strengths with decency and sanity. I want to believe thus far; you would have increased the scope of your thinking a little more, so we flow better in the following paragraphs.

Again, I say it… Let us express our strengths in the most dignifying ways possible. Dignifying is the keyword here. Do not take it off your mind’s eye as you go through these lines, so you do not lose focus.

Then what is not strength? It is anything that makes us vulnerable or puts us forward as irresponsible!

Being vulnerable is an adult who indulges in the use of psychoactive substances. It is the woman who is found in any corner, tripping on hard drugs or alcohol and getting raped. Vulnerability or irresponsibility is the woman who comes before a judge seeking justice and is asked humiliating questions like “why were you dressed that way, what was your motive? What is your relationship with the accused? Why were you found under such circumstances? So, what are the basis of your claims?” Trust me! Attorneys can be merciless. Professor Annalise Keating has no boundaries in court. She roars like a hungry, angry, injured lion! Yes, picture that. So, we do not walk away feeling that the justice system is against women. We are more powerful than that!

If we must challenge the justice system (as I believe we ought), let us check ourselves knowing that a failed justice system would have nothing on us!

I STAND WITH THE FACT THAT JUST ANY CAMPAIGN IS NOT THE SOLUTION!

These kinds of abuses have existed for ages and I doubt if we can reduce them to zero spontaneously.

Let me ask you a few. You, I mean you who thus far have seen the value in the content of these pages and you who still believes any campaign away from sending these “Monsters” to jail is not good enough, let me ask you these simple questions!

Whatever your motive might be, what are your goals? What do we honestly have in mind or at heart to achieve with whatever approach we’re using? Are all these just vengeance inspired plots and nothing more? Is the long term goal to rip families of their sons, brothers, fathers, sisters, mothers, daughters? Is the goal to keep these vulnerable populations from at all having such a horrible experience? Is it to tell other women it’s okay to walk around half-naked, it’s okay to get high on drugs and alcohol, rather than draw in our daughters and caution them, telling them about dignity and decency!?

I STAND WITH THE RIGHT CAMPAIGN!

I stand with WOMEN

I stand with Justice from the right standing.

What do “You” stand for?

A woman that has had her share of childhood abuse too.

6 responses to “RAPE:THE RAPIST OR THE VICTIM; I STAND WITH NO ONE (THE CONCLUSION)”