Some individuals have a low threshold for experiencing anger naturally. Some others have had their threshold for anger lowered because of psychological disturbances or outright mental illness. Either of these needs to be helped to exert control over their responses when they are angry.

Some individuals have a low threshold for experiencing anger naturally. Some others have had their threshold for anger lowered because of psychological disturbances or outright mental illness. Either of these needs to be helped to exert control over their responses when they are angry. This is because, when people fail to control themselves during bouts of anger, their actions can be worse than the object or situation that provoked the anger.

Two major factors determine the expression of anger. The first one is the person who is provoked. If two or more persons experience the same negative circumstance, there will be two or more responses. 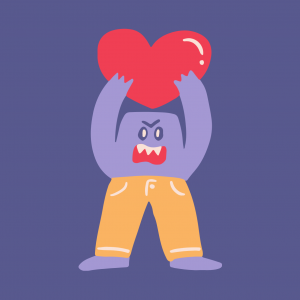 A typical example is the situation of persons who were sacked from some banks during the pandemic. While some had experienced anger and are now picketing these banks, there had been others who were so depressed that they became suicidal. It is scientifically documented that the loss of any object or person could trigger off a sequence of emotional reactions which include denial, anger, and depression.

There are lots of variables that determine how an individual will normally respond. The most enduring one is the individual’s personality.

Another factor is the environment.

Where you are, and the person(s) you are with will determine how you will express your anger. Imagine a scenario in which you are driving along the road, and a rough driver hit your car from behind. That action sets off a cascade of psychological and bodily reactions; overwhelming anger, muscle tension, restlessness, and agitation with your heart rate and blood pressure shooting up. You angrily swing your door open without looking at your side mirror, a random motorcyclist runs into the door you suddenly opened; injuring himself and his two passengers. You then rushed to unleash whatever you can on the driver that caused all these and you find:

I am sure that your reaction will be moderated by the different realities of the 3 scenarios.

The case of MR B (continued from last week)

Even though he believed his anger was justifiable, he decided to please his wife who had been subtly mounting pressure on him by denying him some “rights and privileges”. She pressurized him until he picked up his phone and called his friend. He believed that it will not be a fruitless venture as his pastor friend would (at least) pray for him to get a new job.

Although Pastor S works as a school counselor, he had been improving himself by undergoing some short courses in psychotherapy. He is a part-time pastor at a Pentecostal church in the town, with lots of experience and insight into spiritual matters.

He agreed to see Mr. and Mrs. B at his office in the church the next Saturday morning after his usual church cleaning activities. As they came into his office, he noticed that his friend had changed physically! He welcomed them warmly offering them something to drink. “Tea or coffee”, he said as he opened the refrigerator. He didn’t get any response from either of them. He looked away from the fridge and glanced at the couple. He noticed that Mrs. B was staring at her husband while he was looking down at his hands placed on his thighs as he sat at the edge of the couch.

Pastor S brought out the containers of the tea, coffee, milk, and sugar, placed them on the side stool beside him, and then pushed them across the floor tiles to the front of the couple’s seat. None of them made any move to accept or reject his offer. He then spoke directly to his friend “Omo B, what is happening? You don’t look too good”.  He waited to see if he would get a response but got an unusual silence. This was unusual in the sense that Mr. B was a fun-loving, talkative, and friendly person. He then looked directly at Mrs. B and asked her the same question. She then narrated the recent incident and referred to previous incidents that show a similar pattern of unwarranted expression of anger. Pastor S asked when exactly she first noticed these. She explained that this had been on actually before they got married, but appears to have become worse since he lost his job. She explained that recently, he had almost engaged in a physical brawl with their neighbor who recently installed a new satellite dish, with its alignment positioned towards their overhead water storage tank. He alleged that the satellite dish was releasing radioactive waves which were responsible for his sleeplessness and weight loss. Pastor S then asked Mr. B if what his wife said was true. Mr. B said, “It’s not like that. You will not understand”!

You can suggest more than one option. A brief explanation of your choice(s) will be appreciated.

Note: This story is entirely “fictional”.

Names, characters, businesses, places, events, locales, and incidents are the products of the author’s imagination for education and information about mental health issues. Any resemblance to actual persons, living or dead, or actual events is purely coincidental.